The group has come a long way since its humble beginnings over 40 years ago. Koula Mouratidis spearheaded the formation of a dance troupe, along with a small group of other Greek-American from the Greater Philadelphia area. This group was associated with the Youth chapter of the Pan-Macedonian Society of Philadelphia. A handful of the original dancers were Greek immigrants and had performed professionally with groups in Greece. This level of skill helped the members of that original group grow even more knowledgeable about their performances. 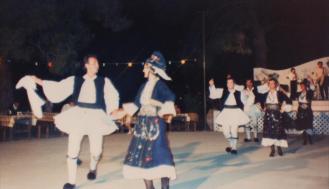 Mrs. Mouratidis’ leadership was followed soon after by Dionysia Leontidis, who was the director for several years in the late-70’s. During this time, Panagiotis Mitoulis was instrumental in getting the group off the ground as an adviser. Helen Papageorge was the adviser subsequently. Mrs. Papageorge is still revered as one of the most passionate members that the Pan-Macedonian Society of Philadelphia has ever seen. The dance group practiced out of Mrs. Papageorge’s basement through much of the 1980’s. She also lead the effort to purchase costumes from Greece (previously, all costumes were homemade.) After Mrs. Papageorge, George Christoforidis, a talented dancer and member of the Pan-Macedonian youth, played the roll of adviser of the group.

Sotiris Seherlis lead the group  in the late 80’s and early 90’s. His knowledge of Macedonian dances was immense after having danced with a group in Thessaloniki, Greece in his youth. Interestingly, some of the less popularly known variations of dances performed by the Spirit of Macedonia today were introduced by Mr. Seherlis 30 years ago. His dedication as the leader spanned over a decade.

During this time, the Spirit of Macedonia moved out of practicing in members’ basement to holding practices at St. Luke Greek Orthodox Church in Broomall and St. Demetrios Greek Orthodox Church in Upper Darby. Eventually, The Pan-Macedonian Society of Philadelphia purchased its own building in Upper Darby, which became the permanent practice location for the Spirit of Macedonia. 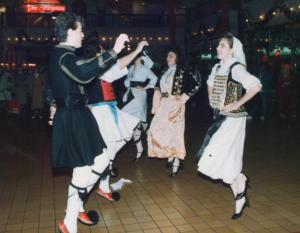 After Mr. Seherlis, the group was led by Christos Tsekaris; arguably one of the most influential and knowledgeable figures active in Greek traditional dance today in the Greater Philadelphia region. Mr. Tskekaris had a great deal of experience performing with groups in Greece and brought a high level of professionalism to the Spirit of Macedonia. By always keeping the goal of authenticity in mind, Mr. Tsekaris built a group that was very conscious of the traditional nature of the dances. His attention to detail was central in building a high admiration of the Spirit of Macedonia from those very knowledgeable in traditional Greek dance.

Nick Yiantsos lead the group as it’s teacher after Mr. Tsekaris for a year. He had been a dancer in the 80’s and his passion for the Spirit of Macedonia and the Pan-Macedonian Society has kept him involved with the organizations for decades. He was assisted by advisers Dena Verikakis and Christos Christakis. Their work was instrumental in keeping the Youth of Alexander the Great vibrant through the 90’s and 2000’s.

Roula Vlazaki Gianneas became the next director and teacher in the mid 90’s. Coming from a performing-arts background, Mrs. Gianneas brought the dance group to a new level by including including choreography in the dance routine. This method was reminiscent of the performances by the Dora Stratou Theater in Athens; the premier Greek Dance school in the world. One of the most memorable performances was one choreographed by Mrs. Gianneas to the song Emeis oi Ellines or “We Greeks”. This was a particularly appropriate song for the Spirit of Macedonia, as it was sung about their generation of Greeks in the Diaspora. Roula was also instrumental in bringing many dance groups from Greece to perform in the United States. Her legacy was continued by her son, Dimitri Gianneas, by leading the group subsequently.

Mr. Tsekaris again lead the group in the late 90’s. During this time, the Pan-Macedonian Society sold its facility in Upper Darby and the Spirit of Macedonia moved back to practicing in St. Demetrios’ hall. Mr. Tsekaris’ second stint as leader, the dance group solidified it’s well-earned reputation as one of the area’s best.

Since 2008, the group has been lead by Kosmas Yiantsos. As a director/performer, Mr. Yiantsos brings an energy to the group that is apparent in every performance. His ability to innovate is well balanced out by his respect for the traditions he learned while dancing in the Spirit of Macedonia for over a decade.

The current practice location of St. George Greek Orthodox Church in Media, Pennsylvania is now the newest practice location for the ever-growing group. Members come from near and far for weekly practices, some from over an hour away in the tri-state area. The Spirit of Macedonia serves to bridge the multiple sub-communities of the Greater Philadelphia Greek community; dancers hail from nine of the region’s Greek Orthodox Church sub-communities, and there are also local Greek-American college students from out of town who are also members of the dance group.

The numbers of dancers in the group have waxed and waned over its long history; at some periods there were over 80 dancers across three different age-separated groups. Over the past four decades, it is estimated that over 1,000 individuals have danced with the Spirit of Macedonia. Many of those past dancers recall their time performing and traveling with the group as one of their most treasured memories. The current dancers of the Spirit of Macedonia today understand the long legacy they are upholding and are proud to continue to keep the Greek Spirit alive and flourishing.